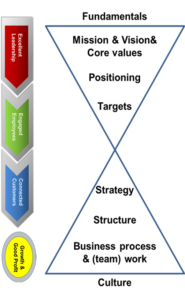 est shaping for the future is an hourglass. Not only referring to the female body, also to the shape a company needs to be in. The idea behind the hourglass model is that you first realize what your ambitions are. That’s an intense process of conceptualization; thinking what the fundamentals are of your organization. Then directing with a clear hierarchy of targets and coaching the employees to realize the ambitions. On a solid base you build a vital culture.

Merged with this step flow model is the Chain of Excellence. Though visualized as a line, it’s a continuum. Not only repeating but also iterative if drastic changes pop up.

Organization vitality means that you are agile to tackle issues thanks to pro-active thinking. Well aware of your compass makes you more adaptive in the course of action.

The concept of the Chain of Excellence is that long term success leans on loyal (internal) customers, cherished by engaged employees which demands excellent leadership. And that applies to both profit and not for profit organizations. The definition of success may differ, the concept is universal.

The similarity between both models is that you start in a rational way and only can be successful if you inspire all stakeholders; first employees, then customers, suppliers etc. Also in its execution it will have these two elements; inspiration and rationale.

One of my (business)life-changing experiences was the Orlando Experience in 2014. We visited several companies, renowned for their customer success. Jet Blue, Harley-Davidson, Whole foods, Waldorf hotels and Disney among others. The key take out was that customer success equals employee engagement. Stunning numbers like only 10 out of 1.400 employees changing from Waldorf to the new neighbour hotel that was offering way better salaries. Yet not the spirit and thrill of the ‘Waldorf Way’. Also, the dynamics at Disney; combining military like operations and discipline with sheer enthusiasm of cast members (Disney’s term for employees). 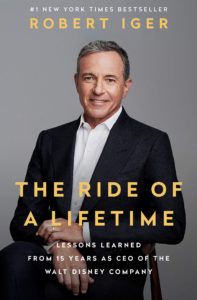 Recently I read ‘the ride of a lifetime’ of Bob Iger, CEO of Disney from 2005 until 2020. It’s the guide to understand what leadership takes. First challenge yourself to have a limited number of strategic priorities. Then share it with your employees, coach them in achieving them by living the reason why, not following a set of instructions. In 2020 Bob Iger noted that the three strategic priorities he started with in 2005 still guided Disney. Thus underlining organization vitality is not about quick fixes, but belief and perseverance